As many people know, fractal art is created on a computer using special types of fractal imaging programs. This allows artists who are more familiar with computer algorithms than drawing and painting to create stunning works of art that speak to a whole new generation of art lovers. However, many people are unaware that fractal art is actually inspired by natural and can be seen in a large number of natural formations. Here are some of the most striking fractal patterns that can be found in nature.

This very variant and appealing type of cauliflower perfectly demonstrates the natural state of fractal patterns. The pattern of the romanesco broccoli is a naturally occurring representation of the special Fibonacci spiral that is also known as the golden spiral and is a logarithmic spiral in which every quarter turn becomes further from its origin by a factor of phi, which is known as the golden ratio.

The salt flats of San Francisco Bay have been used for more than a century for commercial salt production. This commercial salt can be found in the homes of millions of people all around the world, few of which would ever guess that it is created by one of the most impressive natural fractal patterns. The world’s largest salt flat is Salar de Uyuni in the south of Bolivia and the encrusted salt on the enormous flat plane demonstrates a pattern that despite being completely random is remarkably consistent, which is one of the main characteristics of fractal patterns.

Ammonites have been extinct for more tha 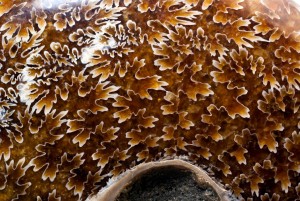 n sixty-five million years and were special marine cephalopods that created stunning chambered spiral shells. The walls that can be found between these chambers, which are called sutures, were comprised of extremely complex fractal curves and this is the oldest known type of fractal pattern in the world.